21-1-2021 HEALTH and FOOD FoodSafetyNews 61 Print this Page
Officials in Germany and Denmark have reported low levels of pesticide residues in food.
A report, published by the German Federal Office for Consumer Protection and Food Safety (BVL), is based on results from 20,283 food samples as part of official controls in 2019 . Selection of samples was largely risk-based, which means local authorities looked more at food that had caused issues in the past.
In 2019, Germany issued 38 Rapid Alert System for Food and Feed (RASFF) notifications because of pesticide residues. Twelve of them were alerts.
For cereals, the proportion of samples examined with detected residues fell from 46 percent in 2018 to 31 percent of 850 samples in 2019. The number above the maximum residue level also fell from 4.7 percent to 3.2 percent.
For foods with at least 100 examined samples, most problems were found in pomegranates, tea and beans with pods. Foodstuffs with non-compliance rates of more than 10 percent were mainly exotic fruits and vegetables like okras, cactus fruits, guavas and passion fruits.
Detail by category
For infants and young children, low levels for pesticides apply. While the rate of exceedances fell from 2015 to 1.2 percent in 2018, it rose to 2.9 percent in 2019, or 15 of 516 samples. The proportion of samples for these vulnerable groups in which residues were quantifiable increased to 16.5 percent from 14.4 percent in 2018.
In 2019, the maximum residue levels were exceeded in 1 percent of examined foods from Germany compared to 1.3 percent in 2018. For food from other EU countries, the rate was 1.3 percent versus 1.5 percent in 2018. For products from non-EU nations 6.5 percent were non-compliant compared to 8.8 percent in 2018.
For organic food, the proportion of samples with residues above the maximum levels was 1 percent. For the comparable categories of conventional goods, this value was 2.6 percent.
More than one substance was detected in nearly a quarter of all samples examined. In individual samples of tea, strawberries, peppers and chilies, table grapes, fresh herbs, tomatoes, mangoes, cherries, cucumbers and zucchinis more than 10 different active ingredients were found.
On average, each food sample was analyzed for 378 different substances. For 153 substances residues above the maximum residue levels were detected. The most noticeable among the 663 MRL exceedances were nicotine, fosetyl, dithiocarbamates and chlorpyrifos.
Danish findings
Meanwhile, the Danish Veterinary and Food Administration (Fødevarestyrelsen) found there is generally a low amount of pesticide residue in the fruit and vegetables sold in supermarkets.
The report, prepared with the DTU Food Institute, revealed the overall picture for pesticide residues in food on the Danish market was comparable with previous years.
In 2019, 2,055 samples were taken of different fruits, vegetables and cereals products. In 98 percent of these foods, pesticide residues were below the legal limit.
Eight samples of fruit, 12 of vegetables and three of cereals had pesticide residues above the limit. Two were Danish and 21 samples were foreign. Three were adjudged to pose a health risk and were withdrawn from the market.
Pesticide residues were found in 72 percent of 591 fruit samples, 34 percent of 583 vegetables and 45 percent of cereals, rice and corn.
A total of 175 organic product samples were taken and pesticide residues were found in two organic vegetable items – a banana from Ecuador and kale from Spain both contained spinosad.
Some foods contained several different pesticides in the same sample. One sample from another EU country contained 10 pesticides and one from outside the EU had nine.
(To sign up for a free subscription to Food Safety News,  click here .) 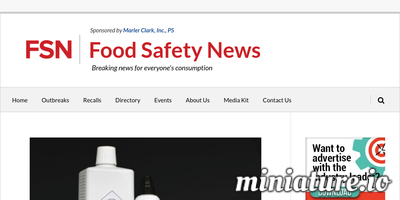