20-1-2021 HEALTH and FOOD FoodSafetyNews 44 Print this Page
Food poisoning has been the main food safety concern of surveyed Japanese people for almost every year since 2008, according to a study.
Food poisoning was ranked as the top food safety related hazard causing concern in 10 of the past 11 surveys from 2004 to 2018. However, the number of cases has decreased in the past 15 years with 1,330 infections in 2018, reported the study published in a journal managed by the Japan Science and Technology Agency.
Researchers looked at 15 years since the Food Safety Commission of Japan (FSCJ) was established in 2003. The study explored the changes in risk perception using the annual food safety monitor survey results published by the FSCJ.
The survey asks 470 people annually about hazards related to food safety; such as food additives, pesticide residues, antimicrobial resistance, contaminants such as cadmium, methylmercury, and arsenic, food poisoning due to microorganisms, and chemical substances from food contact materials.
One-off events and emerging concerns
A score is given for each hazard with the respondents giving 0 points for “I do not know about the hazard” and “I am not concerned at all,” one for “I am hardly concerned,” two for “I am not certain,” three for “I am somewhat concerned,” and four points for “I am very concerned.”
In the survey of 2004, contaminants including cadmium, methylmercury and arsenic and pesticide residues were ranked first and second. However, they have gradually gone down since 2008, and have placed lower than fifth since 2016.
In 2011, the hazard category ranked first was radioactive materials; however, it has continuously moved down and has been ranked lower than fifth since 2017. The 2011 survey was carried out just after the nuclear accident in Fukushima of that year. In contrast, food poisoning due to harmful microorganisms was fourth in 2004 and has been first since 2008 except in 2011.
In 2017 and 2018, allergens appeared in the top five issues while mycotoxins has been there for the past three years.
Communicating risk
Researchers also looked at differences in concern levels based on job experience and gender.
Concern related to food additives and pesticide residues intentionally added to foods and controlled has gradually decreased. These scores were considerably lower in men than women. Scores were also lower for individuals with professional experience in the food sector than those without experience. Concern on contaminants were lower for men with professional experience.
Scientists said a gap between food specialists and other attributes in the basic recognition of risk makes it difficult to communicate effectively among various interested individuals.
“To improve the quality of risk communication in the food safety field, it will be necessary to provide scientific knowledge and information regarding food safety management mechanisms for individuals without professional experience in the food sector, taking into account the changes in information media and influence on risk perception,” they added.
(To sign up for a free subscription to Food Safety News,  click here .) 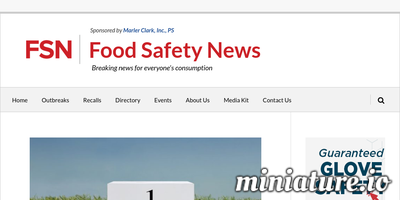