12-1-2021 WORLD ART ArtNews 43 Print this Page
Good morning! It’s Tuesday, January 12.
The Smithsonian has scaled back a proposed $2 billion construction project in Washington, D.C., and Canada now has its first Indigenous public art museum leader: John G. Hampton, at the MacKenzie Art Gallery.
To receive Morning Links in your inbox every weekday, sign up for our  Breakfast with ARTnews newsletter.
The Headlines
THE SMITHSONIAN HAS NIXED A GRAND PLAN  it unveiled in 2014 to remake 17 acres around its administration building in Washington, D.C. Its leadership “jettisoned the eye-popping elements of the $2 billion design by Danish architect  Bjarke Ingels ,”  Peggy McGlone  reports in the  Washington Post   . The design by the reliably grandiose Ingels had an estimated construction timeline of 20 to 30 years. “It’s simply the evolutionary process, me coming in and asking certain questions,” Smithsonian Secretary Lonnie G. Bunch III said of the change. A new plan which will be unveiled Thursday. Meanwhile,  the Art Newspaper  has a look at the ongoing debate over artist  Hiroshi Sugimoto ’s proposed redesign of outdoor spaces at the Smithsonian’s  Hirshhorn Museum and Sculpture Garden , which has generated controversy and gone through various revisions. Sugimoto has said he is open to changes, but would withdraw his blueprints if certain elements are removed. “Take me or not take me—I hope this won’t happen, but that’s what I have to say,” he said.  “To be or not to be.”
EL ANATSUI RECEIVES THE PROFILE TREATMENT  in this week’s  New Yorker , in a story by  Julian Lucas , and it’s a good one, a biographical sketch that doubles as a brief history of contemporary African art. One of his generation’s most successful artists, the 76-year-old Ghanaian is renowned for his bottle-cap tapestries, and recently employed 150 temporary workers to complete three major pieces, but he lives in a modest home and his cars are “disreputable-looking,” according to one friend. “You do what is necessary—only—and don’t bother with extravagance,” Anatsui says. He’s creating an altarpiece for Ghana’s forthcoming national cathedral, which is being designed by  David Adjaye  in Accra, and he’s built a studio and residence in the nearby city of Tema. The artist is also “looking for fresh material,” Lucas writes. “One possibility is old fishing boats, which are plentiful in the area, not far from the lagoon where he grew up.”
The Digest
John G. Hampton has been named executive director and CEO of the Mackenzie Art Gallery in Regina, Saskatchewan. He’s reportedly the first Indigenous person to lead a public art museum in Canada.  [Global News]
Art shippers are having trouble moving art out of the United Kingdom to Europe because of Brexit and the U.K. lockdown.  [The Art Newspaper]
A bunch of new art spaces are opening in Australia this year, many of them even before this summer.  [Artforum]
Forensic Architecture ’s plans for a show at Miami Dade College did not come together as it intended. Its curator says the exhibition was censored.  [The New York Times]
Zaha Hadid Architects has been tapped for major new projects in Hong Kong and Shenzen, China.  [Hong Kong Tatler]
The architecture firm Opposite Office has released renderings of the U.S. Capitol transformed into a giant fortress. It’s fairly menacing.  [Dezeen]
Michael Craig-Martin on Al Held: “He looked like a tough guy, but by nature he was gentle, relaxed, generous and good humored, comfortable in his own skin. He had that sophistication and worldliness that comes not from money but hard-won experience.”  [ARTnews]
The storied Lucio’s Restaurant in Sydney, which is closing after 37 years, is auctioning off works from its walls, many of them gifts from prominent Australian artists.  [The Sydney Morning Herald]
The Denver Art Museum is looking to commission an artist to make a 336-square-foot painting.  [Denverite]
Raoul J. Chee Kee recalled the late artist David Medalla’s activities at the 2015 Venice Biennale.  [Philippine Daily Inquirer]
“Do all great artists need a vice?” Jonathan Jones investigates.  [The Guardian]
David Maxwell is “the world’s foremost—and probably only—archaeological scholar of beer cans.” His collection numbers some 4,500 artifacts.  [Atlas Obscura]
The Kicker
Exhausted by the proliferation of bland, indistinguishable online viewing rooms?  Office Baroque , of Antwerp, Belgium, has come up with a novel alternative: it’s staged its latest exhibition in, let us quote, “a reconstruction by a Dutch carpenter, of  Marcel Duchamp ’s . . . famous mini retrospective work  Boite-en-Valise .” Instead of being filled with bite-sized versions of Duchamp’s work, though, this wooden box contains pieces by  Yuji Agematsu ,  Virginia Overton ,  B. Wurtz ,  Darren Bader , and many more. It’s all been carefully photographed and is viewable at  a dedicated website .
Thank you for reading. We’ll see you tomorrow. 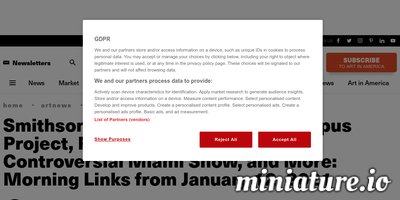