24-11-2020 WORLD ART ArtNews 36 Print this Page
When there weren’t any customers in the Sherwin-Williams store where he worked in Athens, Ohio, the Ohio University senior Tony Piloseno experimented with the store’s paint mixers. Beginning in December, 2019, Piloseno shot short smartphone videos of colors plunging together in saturated, psychedelic swirls and the mixer spinning and shaking the metal buckets around. He added in unlikely ingredients like glitter, glowstick liquid, and even blueberries to various concoctions, unveiling the final hues with a flourish. When he posted the videos to the social network TikTok , they gradually racked up hundreds of thousands of likes. Piloseno’s paint went viral.
Sherwin-Williams wasn’t as amused, however, according to according to BuzzFeed . Piloseno had tried to pitch his TikTok account, @tonesterpaints , internally as a brand marketing channel for younger audiences, taking advantage of its over 1.4 million followers. But in early November the company decided to fire him for “gross misconduct” after customer complaints about stunts like the blueberries (which did result in a beautiful soft blue color). Now Piloseno is mixing colors like key-lime green at home — not as high-tech, but his audience is growing faster than ever. He even created a Gofundme to launch his own paint brand. “It’s hard to explain, but I really enjoy mixing paint,” Piloseno told BuzzFeed. “I like showing what stuff it can do.”

@tonesterpaints
if you cant tell this is my favorite color 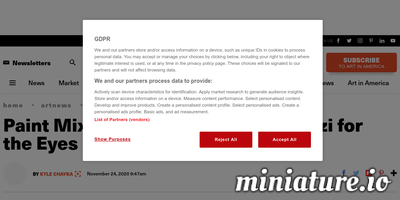