1 week ago HEALTH and FOOD FoodSafetyNews 40 Print this Page
A review has highlighted issues at a Turkish factory that supplied food aid implicated in a deadly outbreak in Uganda that sickened hundreds this past year.
Problems in the processing plant involved poor quality raw materials and lack of traceability back to farms, inadequate quality assurances and recordkeeping, and high quality control and quality assurance staff turnover with inadequate knowledge on Datura stramonium.
In 2019, 315 people became ill and five died following consumption of Super Cereal provided by the World Food Programme (WFP) that was later confirmed to be contaminated by tropane alkaloids. Super Cereal samples had been contaminated with the toxic plant species Datura stramonium also known as jimson weed or thorn‐apple. The source of plant contamination is thought to have originated from harvesting or processing of the soybeans.
From March to April 2019, 282 cases and five fatalities were recorded by health care workers in the Karamoja region of Uganda. In August 2019 another 33 cases were reported in the Lamwo district .
Deficiencies identified at factory
WFP contracted CWA International to help investigate how the tropane alkaloids contamination of Super Cereal occurred.
The study, published in Comprehensive Reviews in Food Science and Food Safety , cites a report from CWA International that found the factory was certified with ISO 9001 and ISO 22000 accreditation in 2018 and 2019, respectively, but food safety concerns remained.
Although the plant was ISO 22000 accredited, tropane alkaloids were present in products, pointing to the need for improved controls to ensure items are made according to WFP Super Cereal specifications.
The plant was found to have acquired animal grade soybean from local farms probably intended for animal feed which allows for higher levels of Datura stramonium seeds.
Raw materials did not meet WFP specifications for Super Cereal as traceability of maize was not possible because none of the Turkish farms from where maize was grown by local suppliers were located.
There was also inconsistency on the percentage of raw material from different sources. According to a June to December 2018 invoice, soya bean was sourced from Serbia, 45 percent, and local farmers in Turkey, 55 percent, contrary to initial information to WFP that the site imports 80 percent of its soya.
High turnover of quality control staff with no manager led to instability and no staff had heard about Datura seeds being toxic with only one technician being trained on toxic seed identification, according to CWA International.
Several quality control reports were not found or didn’t exist and laboratory technicians didn’t have lab books to record activities and observations. There were also “inconsistent” responses from different staff on raw material cleaning in the factory.
CWA International also found a lack of records on pre-cleaning of raw materials before storage in silo, a poor sieving process or only single sieving and no records to show silos are regularly cleaned or information about chemicals used in the factory.
Wider issue
Super Cereal is a blend of maize and soya bean, which is dried and milled before vitamins and minerals are added. The suspected cereal was supplied from Turkey to Algeria, Tanzania and Kenya. From Kenya, it was distributed to other African countries including Uganda, Tanzania, Central African Republic, Rwanda and Somalia.
Product inspections along the supply chain found no issues relating to quality or safety and Uganda was the only country to report food poisoning. Later in 2019, a second contamination incident linked to unprocessed sorghum as food aid was recorded in South Sudan. It is as yet unclear whether the product was from the same supply chain as the Super Cereal or involved different suppliers.
The overall review addressed potential failings in the quality system that allowed contamination to reach the consumer. It describes control strategies for reducing tropane alkaloid contamination of agricultural commodities and health implications after eating contaminated foodstuffs.
Following the Ugandan outbreak focus has shifted to re‐examine legislation, occurrence data, and human exposure to foods contaminated with Datura stramonium. Currently, there are no guidelines on tropane alkaloids from Codex Alimentarius. Only the EU has maximum levels for presence of hyoscyamine and scopolamine concentrations in foods for infants and young children.
If maximum levels are too lenient this may not help control contamination of tropane alkaloids, but strict limits would be unattainable for many farmers and could impact trade.
“Adequate application of food safety control measures (including maximum limits) and good practices, from the start of cereal cultivation through to the final stages of manufacturing of food products can aid in the reduction of seeing toxic plants including Datura stramonium in cereal fields,” according to the review.
(To sign up for a free subscription to Food Safety News,  click here .) 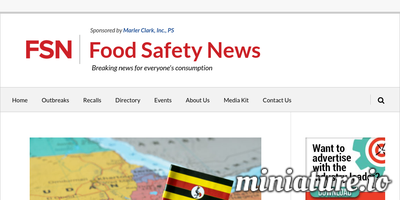