23-9-2020 WORLD ART ArtNews 30 Print this Page
To receive Morning Links in your inbox every weekday, sign up for our  Breakfast with ARTnews   newsletter.
Market
Embattled talk show host Ellen DeGeneres has reportedly parted ways with $10 million in art through a Sotheby’s private gallery. Additionally, she’s selling a Basquiat painting at Van de Weghe’s Long Island outpost. [ Bloomberg ]
New York antiquities dealers Erdal Dere and Faisal Khal have been arrested on charges of fraud. Dere is also being charged with aggravated identity theft. [ The Art Newspaper ]
Vienna Contemporary , one of the few art fairs still holding an in-person event this year, is forging onward. Its latest edition opens this week in Austria. [ Artnet News ]
Museums
The Everson Museum of Art is continuing to face criticism for its choice to deaccession a Jackson Pollock, this time from drama critic Terry Teachout, who calls the move “self-devastating.” [ The Wall Street Journal ]
Monika Grütters, Germany’s culture minister, has said museums in the country have left themselves open to the possibility of future thefts. [ Monopol ]
The Box , a fancy new museum in Plymouth, England, has opened with a show focused on how Indigenous peoples suffered following the landing of the Mayflower in the United States. [ The Guardian ]
Art & Artists
Teju Cole explains why he has turned to Caravaggio’s paintings in dark times, writing, “When he showed suffering, he showed it so startlingly well because he was on both sides of it: He meted it out to others and received it in his own body.” [ The New York Times Magazine ]
A key 17th-century Chinese scroll that was cut into seven pieces has been reunited and is set to go on show in Hong Kong. [ South China Morning Post ]
On a new podcast, adviser Maria Brito discusses why art can be “an entry point for education.” [ The Accutron Show ]
Although Manifesta went ahead with its 2020 biennial in Marseille, France, international attendance has been low. More than 100 groups of trustees, curators, and others have canceled visits. [ The New York Times ] 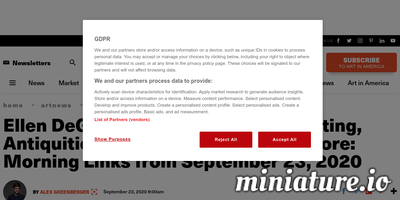