3-8-2020 HEALTH and FOOD FoodSafetyNews 83 Print this Page
As part of its enforcement activities, the Food and Drug Administration sends warning letters to entities under its jurisdiction. Some letters are not posted for public view until weeks or months after they are sent. Business owners have 15 days to respond to FDA warning letters. Warning letters often are not issued until a company has been given months to years to correct problems.
Tailor Cut Produce Inc.
North Brunswick, NJ
Tailor Cut Produce Inc. has been under scrutiny since Dec. 6, when the FDA began investigating a Salmonella Javiana outbreak connected to Tailor Cut Produce. The company issued a recall Dec. 7 of its fr uit luau, cut honeydew, cut cantaloupe and cut pineapple products. This warning letter shows the conditions at Tailor Cut Produce Inc.’s processing facility that could have led to the outbreak that sickened more than 150 people in 14 states .
In a July 8 warning letter the FDA described a Dec.10, 2019, through Feb. 7, 2020, inspection at Tailor Cut Produce Inc.’s ready-to-eat (RTE) fresh-cut produce processing facility . The inspection was initiated as part of an ongoing Salmonella Javiana multi-state outbreak investigation. FDA investigators found serious violations of the Current Good Manufacturing Practice, Hazard Analysis, and Risk-Based Preventive Controls for Human Food regulation.
FDA’s inspection resulted in the issuance of FDA Form 483.
The significant regulation violations noted are as follows:
Hazard Analysis and Risk-Based Preventive Controls:

The firm’s hazard analysis did not identify and evaluate a known or reasonably foreseeable hazard to determine whether it requires preventive control. Specifically, the firm’s hazard analysis did not identify and evaluate environmental pathogens to determine whether they are a hazard requiring preventive control (e.g., sanitation controls). Their RTE Fruit Luau products are exposed to the environment at the processing, mixing, weighing, and packaging steps and the packaged food does not receive a treatment or otherwise include a control measure (such as a formulation lethal to the pathogen) that would significantly minimize the pathogen.
The firm is required to identify and implement preventive controls to provide assurances that any hazards requiring a preventive control will be significantly minimized or prevented and the food manufactured, processed, packed, or held by their facility will not be adulterated. As evidenced by the following, they did not appropriately identify supply-chain controls or adequately implement sanitation controls.
The firm did not identify and implement supply-chain controls. Their “Raw Material Hazard Analysis for Fruit Luau” (Reviewed 8/15/16) indicates that “biological hazards” are known hazards with “low likelihood” and “low severity”; the rationale for this determination is not provided. Pathogens such as Salmonella , Listeria monocytogenes , and pathogenic E. coli are known or reasonably foreseeable hazards in raw agricultural commodities such as fruits and vegetables and have resulted in foodborne illnesses, some of which are severe. The Standards for the Growing, Harvesting, Packing, and Holding of Produce for Human Consumption rule in 21 CFR part 112 was established to minimize such contamination through on-farm controls.

The firm’s revised hazard analysis dated Feb. 9, 2020, identifies a process control for washing whole fresh fruit (including cantaloupe, pineapple, honeydew, and red grapes) in a (redacted) solution at the wash step prior to cutting as the preventive control for the hazard of pathogens such as Salmonella spp. and Listeria monocytogenes . (redacted) the solution does not significantly minimize or prevent pathogens that may require a preventive control at other stages of production, such as pathogens on incoming produce or in the production environment. They do not have any controls in place to ensure that the incoming whole fresh fruit from their suppliers has minimal risk of contamination with pathogens at the receipt, and they have not provided documentation showing they have implemented a written supply chain program that includes supplier approval and supplier verification activities, such as onsite audits.

The firm did not implement the cleaning procedures in its “Tailor Cut Produce Cleaning and Sanitizing Food Contact Surfaces Policy,” which is a sanitation preventive control. The policy indicates that they will use an approved cleaning solution/detergent to remove all visible contamination from equipment parts and all other food contact surfaces, (redacted), and then sanitize using a (redacted) solution. However, FDA investigators observed that they did not clean their processing equipment for RTE fruit mixes with an approved cleaning solution/detergent before they applied the (redacted) solution. Further, their management stated that the food contact surfaces were sanitized using the (redacted) solution without first being cleaned.

Additionally, they do not monitor their sanitation practices regarding cleaning and sanitizing of food contact surfaces to ensure they are not a source of contamination. Specifically, they did not implement their “(redacted)”, which requires “(redacted) on food contact surfaces”. Their management (redacted). Their management also stated that currently there is no other monitoring being conducted.
The firm’s response includes a standard operating procedure (SOP) for cleaning and sanitizing food contact surfaces, revised Jan. 29, 2020. This SOP includes procedures for washing equipment and utensils before sanitizing. However, their response does not include any documentation or completed records to show that this has been implemented (e.g., monitoring records). The FDA will verify the adequacy of the corrective actions and implementation during the next inspection.

They did not implement their “Hand Washing SOP,” which they use as a sanitation preventive control. The SOP states that employees are to wash and sanitize hands and put on gloves, and it lists when employees must do so, including before starting work and after breaks. The procedure also describes monitoring, corrective actions, and verification activities. During the inspection, management stated that the hand-washing sinks in the main processing room and in the washroom were not used and that employees use hand sanitizer and wear disposable gloves during production. Our Investigators observed employees touching non-food contact surfaces upon entering the processing areas (e.g., doors, door handles, and plastic curtain strips) without subsequently washing their hands, which could result in cross-contamination of food and food contact surfaces from unsanitary objects. In addition, the hand-washing sinks in the processing rooms were inaccessible during production.

Their hand-washing SOP revised Jan. 3, 2020, includes procedures for washing hands with soap. However, their response does not include any documentation or completed records to show that this has been implemented (e.g., monitoring records). The FDA will verify the adequacy of the corrective actions and implementation during the next inspection.

The firm did not establish and implement adequate written procedures for environmental monitoring to verify their sanitation controls. Their fresh-cut RTE fruit mix is exposed to the processing plant environment at the processing, mixing, weighing, and packaging steps and the packaged RTE fruit mix does not receive a treatment or otherwise include a control measure that would significantly minimize an environmental pathogen. Their “Cleaning and Sanitizing Food Contact Surfaces Policy” indicates that they will perform daily swab testing for the presence of ATP on food contact surfaces following the sanitization process. However, their policy does not include written procedures for environmental monitoring that identify the test microorganism(s), the number and location of sampling sites, the timing, and frequency for collecting and testing samples, the test(s) conducted including the analytical method(s) used, and the laboratory conducting the testing.

Food Facility Registration:
The FDA has determined that its facility is subject to the registration requirement and FDA implementing regulation. The failure to register a facility as required is a prohibited act. FDA records indicate that as of the date of this letter, their facility is not currently registered.
As a responsible official of a facility that manufactures/processes, packs, or holds food for human or animal consumption in the United States, the firm is responsible for ensuring that their overall operation and the products they distribute are in compliance with the law. The owner, operator, or agent in charge of their facility, or an individual authorized by their facility’s owner, operator, or agent in charge, should register the facility with FDA immediately.
The full warning letter can be viewed here . 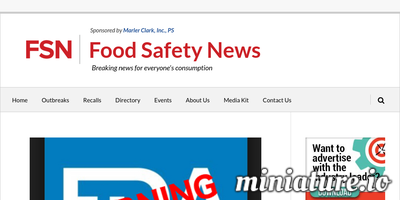