1 week ago HEALTH and FOOD FoodSafetyNews 22 Print this Page
The FDA’s big news is that there is now an EPA-approved protocol for developing pathogen treatments for pre-harvest agricultural water. The agency’s nagging news is that its inspectors still can’t collect water or any other samples from animal ag operations without the express permission of the landowners.
The FDA’s top food safety man said the water protocol is a “big deal and a milestone” for leafy greens. Frank Yiannas, FDA’s deputy commissioner for food policy and response also said “one outbreak is one too many,” during a webinar covering the agency’s leafy greens action plan.
Topics covered during the call included voluntary pilot programs this summer “driven” by industry to better understand problems with traceability and continued efforts by FDA to come up with food safety rules that have been in the works for years.
Yiannas and several others on a webinar call Thursday afternoon referenced the three E. coli outbreaks traced to romaine lettuce from September to December 2019. Short of saying the outbreaks were the result of contamination from an animal feeding operation. The Food and Drug Administration in May released a report pointing a finger straight at a small cattle operation near romaine fields in California.
Mark Moorman, director for the office of food safety at the FDA’s Center for Food Safety and Applied Nutrition, said it’s time for everyone to stop associating contamination incidents with large animal feedlots referred to as concentrated animal feeding operations (CAFOs). He said the outbreaks in the fall of 2019 were all related to one farm that had a relatively small animal operation.
Fecal matter in dust and runoff water has been blamed for several romaine-related E. coli outbreaks in recent years. It can contaminate irrigation water and subsequently contaminate fresh produce in nearby or adjacent fields. Consequently outbreak investigators continue to look at pre-harvest agricultural water as a key element.
One problem, government official said during the webinar, is that inspectors cannot go into animal operations to collect samples unless they have permission from the land owner, which is usually not forthcoming.
“We do not have the authority to go into these areas. We ask, we beg,” said Moorman during the question answer session of the webinar.
Another problem is even if they could access the animal operations for pathogen testing, there aren’t any EPA-approved pesticides for antimicrobial organisms. FDA officials said they believe the new water protocol announced Thursday will help solve that problem.
In addition to the voluntary traceability pilot projects spearheaded by industry, the FDA is conducting a longitudinal study to look at a variety of pieces in the romaine contamination puzzle. Yiannas said it will help outbreak detectives understand how pathogens move and how to prevent outbreaks.
A case in point cited during the webinar for the value of longitudinal studies is work the FDA and state agencies did in the East Coast area known as the Delmarva area. In the area of the convergence of Delaware, Maryland and Virginia a lot of tomatoes are grown. The area was plagued by a series of Salmonella outbreaks until a study revealed that the fields were being irrigated with water from a Salmonella-contaminated pond.
(To sign up for a free subscription to Food Safety News, click here .) 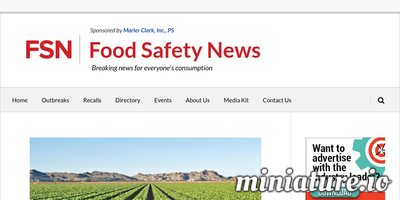