More than 100 sick in Salmonella outbreak of unknown origin

2 weeks ago HEALTH and FOOD FoodSafetyNews 54 Print this Page

More than a month after the first illness onset, federal officials have announced a Salmonella outbreak that has been making people sick since June 19. Of those for whom the information is available a fourth have been admitted to hospitals.
The Centers for Disease Control and Prevention reports the source of the pathogen, which is frequently foodborne, remains the subject of the investigation. The “rapidly growing” outbreak has sickened at least 125 people across 15 states.
Though the outbreak announcement comes weeks after people started becoming sick, the CDC took only 11 days to go public with information once a lab-based computer network identified 13 sick people, all infected by Salmonella Newport. Overall, the outbreak victims’ ages range from 2 to 92 years old. Officials have not confirmed any deaths.
Cases recorded by the CDC as of July 21. Click to enlarge.
On July 10, the CDC’sPulseNet identified the outbreak of 13 Salmonella Newport infections in three states. Over the next 10 days, the outbreak rapidly grew to 125 infections in 15 states.
“CDC PulseNet manages a national database of these sequences that are used to identify possible outbreaks. (Whole Genome Sequencing) WGS gives investigators detailed information about the bacteria causing illness,” according to the outbreak notice.”
“In this investigation, WGS showed that bacteria isolated from ill people were closely related genetically. This means that people in this outbreak are more likely to share a common source of infection.”
Federal officials expect to add patients to the national tally as more information becomes available to the CDC. It is taking an average of two to four weeks in this investigation for an illness to be diagnosed, confirmed, reported to state officials and then reported to federal officials, according to the CDC.
(To sign up for a free subscription to Food Safety News, click here .) 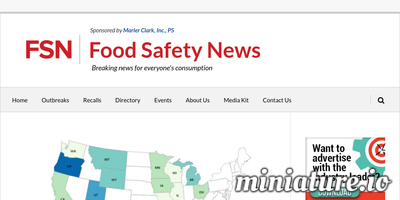