On Thursday, Phillips staged its marquee contemporary evening sale with a night of high results lead by staple names like Joan Mitchell and Jean-Michel Basquiat . The sale comes on the heels of a five-hour long live-streamed global evening sale at Sotheby’s that brought in an excess of $360 million held on Monday, securing a long-awaited reassurance in the market following the pandemic’s overhaul of the traditional auction schedule. The evening’s hour-long sale brought 25 lots lead by auctioneer, Henry Highley, and saw an overall 100% sell-through rate; the auction realized a total figure of $41 million, meeting the high pre-sale estimate. The day sale total rang in at $10.2 million sold 87% by lot.
The leading lot of the night was Joan Mitchell’s canvas  Noël  featuring the artist’s thick, impasto drip field scheme from the early 1960s, consigned from an American collection. The painting met its reserve opening bidding at $8 million quickly, but drew only six bids to meet its pre-sale value of $9.5 million at the hammer. The final price was $11.1 million. In a press conference following the auction, Robert Manley dubbed the work “an auctioneer’s dream.” He noted that two bidders ultimately competed for the work, calling the end result a “knock out painting, for a knock-out price.” The historic work came to the market after nearly three decades in the same hands. It was bought by the seller in 1995 and the Phillips sale marks its debut auction. The high result achieved for the Mitchell follows the sale of the storied Ginny Williams collection at Sotheby’s that reopened the market with aggressive remote bidding on Monday—bringing in new records for female postwar stars like Lee Krasner and Helen Frankenthaler—who have long been undervalued next to their male contemporaries.
In the post-sale press conference, the executive team expressed relief at the market activity seen this week. “Tonight’s sale was a resounding statement about the strength and resilience of our market” said Phillips CEO, Edward Dolman, claiming the results show a pent up demand for art as a result of the pandemic. “There is a significant amount of money on the sidelines waiting for a chance to get back into the art market and invest in art” added Dolman, who noted that although the numbers grossed in today’s total are lower than seen in previous years due to seller concerns in the wake of the global pandemic, the “message to consignors is this is the time to sell.”
Jean-Michel Basquiat’s colossal work on paper  Victor 25448 , at 6 ft. by 11 ft. also drew tepid results with only 4 bids between Robert Manley and Meity Heiden, Phillips Deputy Chairwoman and Head of Private Sales. The painting hammered at its low estimate of $8 million, ultimately achieving $9.25 million with the buyer’s fee included, but failed to meet its high estimate of $12 million. The work’s sale comes on the heels of strong demand for Basquiat’s works on paper, which saw a new record in Sotheby’s June 29 auction, where Basquiat’s  Untitled (Head)  realized a total sale price of $15.2 million. Phillips two top lots seemed to have been met with the challenge of coming to the market after Sotheby’s sales that supplied demand for similar works by both Mitchell and Basquiat. 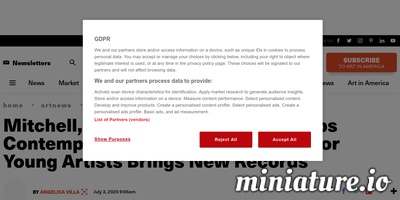