Meat inspection petition with 216,000 signatures given to FSA

1 week ago FOOD FoodSafetyNews 24 Print this Page
A union in the United Kingdom has submitted a petition on meat inspections, signed by more than 216,000 people, to the Food Standards Agency.
Steve Nash, a consumer advisor on E. coli O157, Unison national officer Paul Bell, and Sean Humber, a lawyer at Leigh Day, delivered the petition calling on the FSA to keep meat inspections independent to the agency’s chief executive Emily Miles in London this past week.
Nash lost his daughter, Joanna, more than 20 years ago after she ate meat at a fast food restaurant which contained E. coli and developed hemolytic uremic syndrome (HUS).
“Our 6-year-old daughter Joanna was a beautiful, healthy, fun loving child without a care in the world. A bright future lay ahead of her until suddenly it came to a halt. Joanna ate meat at a fast food restaurant which contained the deadly bacterium E. coli O157 and what came next was unimaginable. She suffered excruciating stomach pains with sickness and diarrhea, her kidneys failed and even with the help of dialysis she deteriorated rapidly. Joanna suffered multi organ failure and within nine days she was dead.”
Moving to a risk-based system
Those behind the petition called on the FSA to scrap plans that would permit slaughterhouses to carry out their own safety inspections. However, no detailed plans about changes to meat regulation have been proposed, according to the FSA.
Unison members in the FSA and local government environmental health officers would be affected by any changes. There used to be 1,500 meat inspectors. Now there are 400 plus contractors, according to Unison.
Bell, who represents the independent meat hygiene inspectors that work directly for the FSA, said the agency is trying to move to a risk-based approach to inspection with slaughterhouses.
He said this means instead of independent meat hygiene inspectors being on the ground every day, the agency wants to have businesses inspected less frequently.
“Then, depending on what comes out of that, they may not be inspected again for the next three years. It’s a cost-cutting move but could have a devastating impact on public health. Meat inspectors spend years doing qualifications and training. In the post-Brexit world, we need to collectively think as a society – not just in government departmental silos – about joined up regulation efforts.”
The petition on Change.org was started by Nash, who is involved with a charity called Haemolytic Uraemic Syndrome Help (HUSH).
FSA response and FSS bring controls in-house
“The way the FSA currently regulates the meat, dairy and wine industries already provides protection for consumers and inspectors have an important role in delivering this,” said a spokesperson for the FSA.
“As a modern and accountable regulator we need to respond to challenges such as new developments in technology and changes in consumer demand. However, food safety and consumer trust will always be our top priority and no detailed plans about changes to meat regulation have been proposed.”
The contract for official controls delivery in meat and dairy plants in England and Wales will be delivered by Eville and Jones Ltd, on behalf of the FSA, from the end of March 2020.
The three-year contract award is valued at £84 million ($109 million). The company also previously supplied these controls.
Eville and Jones has been awarded six separate contracts across all areas of England and Wales, to provide official veterinarians and meat hygiene inspectors to work alongside FSA staff.
Colin Sullivan, FSA chief operating officer, said: “The delivery of these official controls are vital in maintaining the public’s confidence in meat and dairy food products and are also an essential requirement for the U.K. food industry where these sectors are worth over £8.5 billion ($11.1 billion) per year.”
In June 2019, Food Standards Scotland (FSS) ended a contract with Hallmark Meat Hygiene Ltd. Hallmark supplied official veterinarians and meat hygiene inspectors to do controls to support the country’s meat, game and poultry industries.
FSS brought this function back in house from mid-September 2019. Hallmark Veterinary and Compliance Services won the contract in December 2017 and started work in April 2018.
(To sign up for a free subscription to Food Safety News, click here. ) 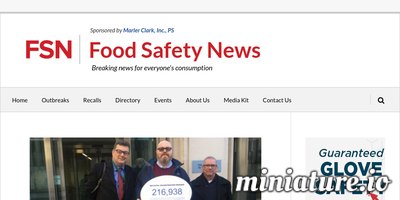