2 days ago HEALTH and FOOD FoodSafetyNews 57 Print this Page
The Rhode Island Department of Health is currently investigating seven Campylobacter infections linked to the consumption of raw shellfish between Aug. 11 and 19.
On Sept. 11, the department and Rhode Island of Environmental Management (DEM) announced the immediate closure of Potters Pond in South Kingstown, RI, to all shellfish harvesting — commercial and public.
The closure is the result of an investigation linking the Campylobacter illnesses to shellfish harvested in the area. A shellfish sample that was collected by the state health department tested positive for Campylobacter lari.
Two of the ill individuals tested positive for Campylobacter Jejuni, which is a different type of Campylobacter. The positive shellfish sample does not match the illnesses from the investigation. However, the detection of Campylobacter lari indicates the presence of Campylobacter. The state health department is collecting additional shellfish samples for further testing.
The state health department has contacted all commercial harvesters in this area to ensure that any product harvested during this time frame is not sold at restaurants and markets.
State health officials are urging recreational harvesters who harvested shellfish in Potters Pond from Sept. 9 through Sept. 11 to either discard the shellfish or avoid consuming them raw or undercooked.
About Campylobacter According to the Centers for Disease Control and Prevention, people with Campylobacter infections usually have diarrhea (often bloody), fever, and stomach cramps. Nausea and vomiting may accompany the diarrhea.
Anyone who consumed shell fish from the area and developed symptoms should seek medical attention and ask for specific testing for the pathogen. The symptoms can mimic other illnesses.
Symptoms usually start two to five days after infection and last about one week. Some people experience complications, such as irritable bowel syndrome, temporary paralysis, and arthritis. In people with weakened immune systems, such as those with a blood disorder, with AIDS, or receiving chemotherapy, Campylobacter occasionally spreads to the bloodstream and causes a life-threatening infection.
(To sign up for a free subscription to Food Safety News, click here .) 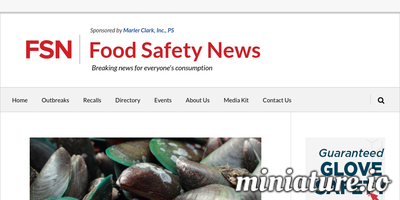