2-8-2021 WORLD ART ArtNews 38 Print this Page
Phillips released its figures for the first half of 2021 this morning and they continue the trend seen in earlier results from larger rivals like Christie’s. Total sales for the first half of the year were $542,680,708 which represents a 25% rise from the occluded sales that took place during the beginning of the global pandemic. Auction results were $452 million, a 15% rise, and private sales grew a heady 107% to $90,673,838.
Phillips’s CEO, Edward Dolman, attributed the success to strong private sales and robust sell-through figures. “Our several “White Glove” sales across New York, Geneva and Hong Kong demonstrate a great sense of optimism and confidence in the market,” Dolman said in statement, “and have led to Phillips maintaining the highest sell-through rates in the industry.”
Phillips did not release figures for their sell-through rates but Christie’s claimed 87% sell-through on all property in the first half of 2021. Phillips did say that private sales in its always open watch division, Perpetual, had increased 81% from the first to second quarters of 2021. The H1 total is $8 million.
Also in line with their competition, Phillips saw 34% of its buyers come from Asia in the first half of the year. And that spending power was demonstrated at the very top of the market where four of the top 10 lots sold at Phillips in 2021 went to bidders from Asia.
Recent results from a series of modern and contemporary art sales Phillips held in collaboration with Chinese auction house Poly Auction demonstrated the ascendance of the Asian market as a dominant buying region during the pandemic. This Spring, Phillips made $122 million across four consecutive white glove sales in one week, a 121% increase over the previous year, marking the highest season total for the house in Asia. 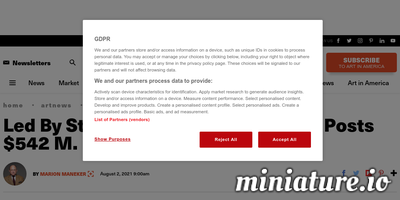