12-5-2021 HEALTH and FOOD FoodSafetyNews 65 Print this Page
A French agency has proposed a guideline value to protect consumers of shellfish from a group of marine biotoxins.
The French Agency for Food, Environmental and Occupational Health and Safety (ANSES) said brevetoxins (BTX) were first detected in mussels in Corsica in 2018. If ingested by humans, these toxins can cause neurological, gastrointestinal or cardiovascular symptoms.
After this finding a few years ago, ANSES was asked by the Directorate General for Food (DGAL) and Directorate General for Health (DGS) to propose a guideline value to protect the health of people who eat shellfish. The agency has published an opinion and report on the subject in French.
Based on reports of food poisoning in other countries, ANSES has set a guideline value to protect consumers of products such as oysters and mussels. This value is 180 µg/kg of shellfish flesh, expressed in BTX-3 equivalents, with BTX-3 being the form of brevetoxin used as the reference.
Emerging risk in Europe
Brevetoxins can be responsible for neurotoxic shellfish poisoning (NSP) if contaminated shellfish are eaten. The most common symptoms are tingling and numbness of the face and extremities. Symptoms usually start between 1 to 24 hours after exposure and may last up to three days.
Contaminated shellfish are not detectable by taste or odor. It cannot be removed by cooking, freezing, or other storage or preparation methods.
No deaths related to these toxins have been recorded yet worldwide but several hundred cases have been reported from Florida, New Zealand and Mexico in previous studies.
They are not currently regulated in France or Europe, where they are considered emerging toxins. The origin of their emergence in France is not yet known. However, they pose a risk in Florida, Australia, New Zealand and Mexico, where they have been regulated for some time. The U.S. Australia, New Zealand and Mexico apply a threshold of 800 μg BTX-2 equivalent per kilogram of shellfish flesh.
A reporting form has been developed for the poison control centers in the toxicovigilance network to record cases associated with consumption of shellfish contaminated by marine toxins such as brevetoxins. This document will help the identification of intoxications and lead to a better estimate on the level of health concern related to brevetoxins in France.
ANSES is also looking at the exposure to brevetoxins via direct contact with contaminated water, associated with swimming, other water activities and inhalation of sea spray. Results will be available by the end of 2021.
(To sign up for a free subscription to Food Safety News,  click here .) 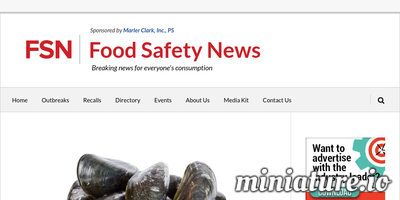