9-5-2021 HEALTH and FOOD FoodSafetyNews 56 Print this Page
Scientists have found Salmonella variants can have different effects on the health of pigs and the risks they pose to food safety.
Two closely related types of Salmonella Typhimurium, called U288 and sequence type (ST) 34, are particularly dominant in pigs and differed in colonization of the intestine and surrounding tissues and severity of disease they produced. The ST34 variant accounts for more than half of all UK human Salmonella Typhimurium infections, while U288 is rarely associated with human infection.
Professor Rob Kingsley from the Quadram Institute and professor Mark Stevens from the Roslin Institute worked with scientists at the Earlham Institute to look at common variants of Salmonella in pigs in the UK.
Using whole genome sequencing the research team found that the two types of Salmonella Typhimurium have been circulating in UK pigs since 2003. Researchers previously examined the emergence and spread of Salmonella in pigs.
Predicting risk and control strategies
In the pork industry, it can impact the health and welfare of pigs and have potential effects on productivity. Salmonella Typhimurium is relatively common in pig herds and processes at slaughterhouses try to prevent contamination of meat destined for the food chain.
Findings from the study, published in the journal Communications Biology , could help to predict the risk of Salmonella variants to animals and people, and help strategies to prevent or control infections.
“Understanding how variants of Salmonella emerge and pinpointing the genetic signatures responsible for adaptation to different hosts and the ability to produce disease will provide opportunities to improve diagnostics and surveillance. In turn this will help to predict the risk that Salmonella variants pose to animal health and food safety,” said Stevens.
The study analysed the genetic makeup of Salmonella strains isolated from pigs and people, to identify variants and understand how they evolved and behave. Samples were collected from human clinical infections during routine diagnosis and from animals during routine surveillance.
This included 1,826 Salmonella Typhimurium isolates from human infections in England and Wales between April 2014 and December 2015 and 79 Salmonella Typhimurium U288 strains isolated from animals in the UK in 2014 and 2015 as part of APHA surveillance and 77 others from 2005 to 2016.
Strain differences
Work involved Public Health England and the Animal and Plant Health Agency (APHA) and was funded by the Biotechnology and Biological Sciences Research Council.
Considerably more viable ST34 bacteria were recovered following desiccation for 24 hours, compared to U288. Monophasic Salmonella Typhimurium ST34 also replicated at a higher rate than U288 in culture, a trait that experts said may result in a higher level of contamination in food.
The U288 variant evolved to acquire genes associated with antimicrobial resistance and variations in molecules linked to virulence as well as growing slower in the lab.
“We have seen these types of changes before in variants of Salmonella that have become adapted to specific host species and cause a more invasive disease, including the type of Salmonella that causes typhoid fever in people but does not affect other species,” said Kingsley.
“One of the interesting findings is just how rapidly pathogens can adapt, and how even a few genomic changes can lead to very different disease outcomes,” said Dr. Matt Bawn, a researcher on the study based at the Earlham Institute and Quadram Institute.
(To sign up for a free subscription to Food Safety News,  click here .) 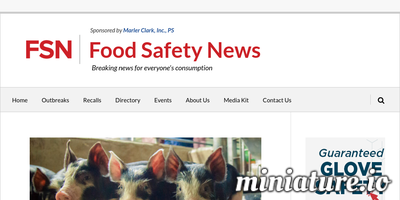